Historically, Executive Coaching was provided only to the most senior executives (hence the name) and was considered to be a highly confidential matter. With the current emphasis on talent management, coaching, as it is more broadly known, has become one of the primary tools that organizations use to optimize organizational performance.

Broadly defined, Executive Coaching is a process that facilitates the development of self-awareness, skill building and behavioral change in key business areas. Often these include:

Executive Coaching has evolved to be an effective tool in talent management practices that assists organizations in pursuit of their strategic objectives and allows them to gain a competitive advantage by leveraging and accelerating the development of their human capital. More specifically, high performing organizations are gaining that competitive advantage by integrating and aligning executive coaching to their business strategy to:

Career Partners International, one of the largest talent management consultancies in the world, recently hosted a webinar entitled “Optimizing Organizational Performance through Executive Coaching.” A survey conducted in conjunction with the registration for the webinar indicated that, of the 900+ registrants (primarily human resources and business executives), over 90% view Executive Coaching as “Somewhat Important” to “Critical” to their organization and only 8% indicated that it was “not important” or “not on [their] development agenda” at all.

Similar results were found during a poll in Career Partners International’s Coaching Webinar. In this “real time” polling question, participants selected all of the options that applied to their organization for the use of coaching. The results showed that 59% of respondents use coaching for High-Potential Support, 52% for Team Development, 34% for Derailing Issues (career impediments), 31% for Promotion/Advancement, and 14% for On-boarding (also known as assimilation or role transition coaching). 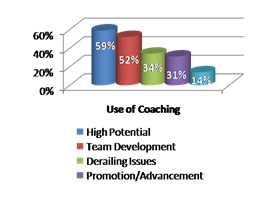 If executive coaches are being engaged to develop potential as indicated by both the HBR study and the Coaching Webinar poll, why aren’t more organizations realizing the competitive advantage? The answer lies in the integration of Executive Coaching in the overall talent development strategy and the alignment to the organization’s strategic business strategy. This is evidenced by two case studies presented during the webinar, BASF and Rabobank.

A high performing multinational organization, BASF earned recognition as one of the World’s Most Admired Chemical Companies in 2011. A corporate version of the “perfect storm” catapulted their use of executive coaching to optimize organizational performance: a new business strategy that was needed in North America; a global employee survey that showed employees’ desires for development and growth; and a leadership pipeline that was fading.

Seeking to re-energize the workforce, build a pipeline for succession management and create a culture of collaboration and support to achieve its new business strategy, BASF leadership chose to start at the top and implemented an Executive Coaching initiative for senior management that was aligned with the business strategy and integrated into the organization’s leadership development agenda. As with anything “new”, apprehension existed and some resistance was received. Coaching had been previously used primarily for poor performers yet the current coaching initiative was clearly being used with successful executives to further enhance their careers within BASF. The value of having individuals achieve and function at their potential and the impact of that on the company fueled BASF to make executive coaching a “standard practice” for senior leaders assuming new roles.

As accelerated levels of proficiency and achievement of goals were observed, pushback evaporated and more employees at BASF began proactively asking for coaches. The paradigm shift was successful as coaching became “essential” for key transitions and was desired at multiple levels within the organization. The CEO of North America and the SVP of HR for North America, both of whom were recipients of executive coaching, were promoted to Global Chairman of the Board of BASF and Global HR – Executive Management & Development, respectively.

As demonstrated in this case study, for Executive Coaching to really propel the organization forward, the initiative must be aligned with the business strategy and meet strategic organizational needs. It cannot be a series of independent initiatives. Also, the coaching should be evidence-based, meaning it uses data which can be in the form of individual personality and style, business context and objective assessments. It should be goal-directed and solution-focused. Most importantly, Executive Coaching must be integrated purposefully into the organization in order to have the desired ultimate impact on business performance.

As mentioned previously, some organizations view Executive Coaching with some skepticism primarily as a result of perceptions such as a lack of a common methodology, inconsistency in coach preparation and coaching competencies, and an inability to deliver tangible results. While some skepticism may be prudent and encourage due diligence to avoid working with poorly qualified coaches, these perceptions are typically unfounded when working with reputable firms and coaches.

There are a number of coach attributes that organizations should incorporate in their selection criteria. These include strong business acumen with an understanding of what goes on, not only in business, but in coaching best practices as well, and the ability to integrate the two is essential. A coach needs flexibility to work within many contexts and expertise in human and organizational dynamics is critical. He or she should have a range of tactics and tools to employ in the coaching process with a methodology for their use and impact. Additionally, an effective coach must be current on business literature, coaching best practices, be creative in his or her thinking and possess excellent communication skills to provide constructive insights to the coachee. Lastly, the coach needs to be able to build a strong rapport with the person being coached in order to translate theory into practice in a wide variety of industry settings in a way that is meaningful for the coachee.

Ensuring the use of a coaching model is also prudent. A simple yet highly successful coaching model often used within Career Partners International is the ACE Model. The acronym ACE stands for Awareness, Choice and Execution. (See the insert below for the process.)

Using a proven process results in more effective coaching that:

Of the points identified above, determining ROI may be the most challenging. When asked “How do you get ROI?” 40% of Coaching Webinar participants indicated they do not measure ROI while 39% measure anecdotally or by gut instinct and only 21% measure through quantitative analysis. 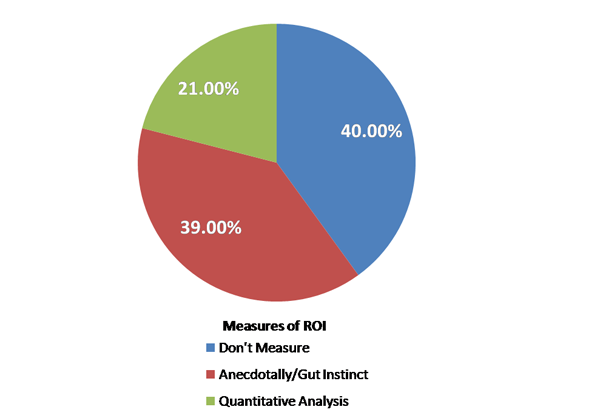 To facilitate the delivery of a return on investment, measurement should be data-based using an Individual Development Plan (IDP) which is specifically developed by the coachee in conjunction with the coach to set clear goals, identify behaviors to be changed, development processes to be utilized, tools and strategies employed and timelines for change to occur. Measurement should also be based on objective criteria and should include documented feedback from superiors, peers and direct reports to monitor behavioral change throughout the coaching process.

The second case study presented by Rabobank, a global financial service leader and one of the world’s largest banks with operations throughout the world, illustrates the value of clear goals and their impact on ROI. The use of targeted Executive Coaching within Rabobank was dictated by the need to do more with less and through the use of coaching, the bank was able to leverage and accelerate the development of its executives. Rabobank identified two key factors that contribute to a successful coaching engagement:

Rabobank also was able to identify and tie their return on investment in coaching to multiple measurable outcomes which included better recognition of employee needs and solutions, establishment of common understanding and values based on interaction, increased trust among all staff with adoption of common goals and increased performance resulting from improved collaboration. The impact of these outcomes were not only measured on their own merit but also on the impact they had on the group’s overarching business goals, namely capital usage, cost containment and revenue enhancement, which were metrics Rabobank measured across the enterprise. As the case study confirmed, the Executive Coaching led to the achievement of these goals and had a positive impact on every one of these metrics.

While there is a strong business case for utilizing Executive Coaching to advance organizational performance, some organizations struggle to incorporate it into their talent management strategy. During the Coaching Webinar, when asked the question, “What are the obstacles your organization faces to using coaching?” respondents indicated:

In today’s economy, companies are operating with smaller staffs and increased workloads. Employees, whether existing leaders or high potentials who are future leaders, are expected to function at their fullest potential and with high engagement. In order for employees to achieve their potential and to allow companies to maximize their human capital, Executive Coaching is quickly moving to the forefront of organizations’ talent management strategies.

While Executive Coaching may have experienced its biggest growth spurt in the last decade of the 20th century, the early 21st century may well be known as the era in which Executive Coaching reaches its maturity and becomes a staple in optimizing organizational performance.